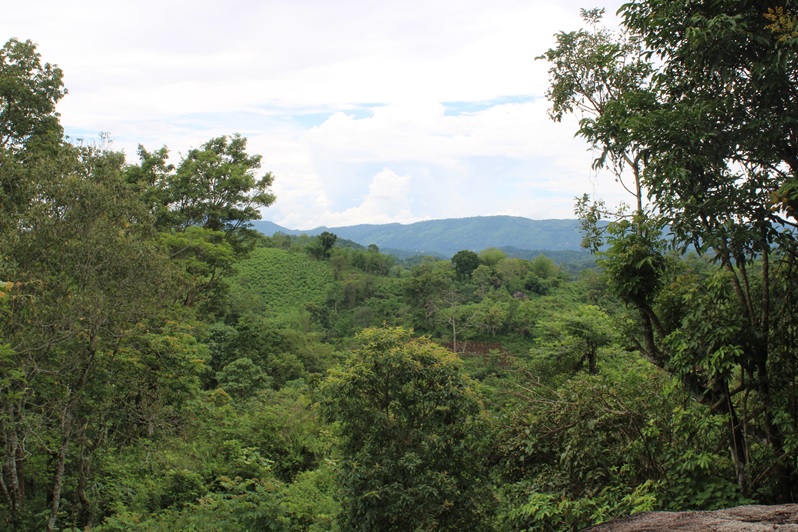 Mawkyrdep Village falls under Bhoi Rymbong C&RD block of Ri-Bhoi district in the state of Meghalaya. The village is at a distance of 70 Kms from Nongpoh, the district headquarters of Ri Bhoi District and is at a total distance of 42 Kms from the state capital, Shillong.

It is one of the oldest villages in Ri Bhoi District formed in the early 1800 by (late) Mr. Joseph Jymme Duia, who also happened to be the first headman or Sordar of Mawkyrdep Village and ever since many smaller villages have sprung from it. It falls under the “Raid Madan Kyrdem” with a total geographical area of 165.25 ha and a total population of 726 villagers.

Agriculture is the main occupation of Mawkyrdep Village wherein traditional approaches of cultivation like Jhum or the shifting cultivation and Terrace cultivation is adapted. The Village not only produces cash crops but also various fruits, vegetables, betel vine. The forests in the village have a lot of medicinal plants which grow naturally in the wild.

There are two schools inside the village, out of which one is a Secondary School and the other is a Higher Secondary School. The health dispensary is 1 km away; the nearest Bank is about 7 km away and the Post office is also 1 km from the village.

The people of the village rely on agriculture and forest products for their livelihood. The main occupation of the villagers is farming followed by teaching and engineering.

The village has a total number of 130 Health cardholders, 112 Ration cardholders. The major occupation of the people is farming while some are teacher and govt. servants.

The Assistant Manager (Knowledge management) gave a detailed introduction on the Community led Landscape Management Project (CLLMP) and explained the process to be carried out during the implementation of the project and the importance of the involvement of the community for the CLLM-Project to be a success.

The Assistant Manager (Environmental management) gave a brief introduction on Meghalaya Basin Management Agency (MBMA) and elucidated about the various programmes and projects undertaken by MBMA. He also spoke about the different aspects and procedures of the Community Led Landscape Management Project (CLLMP) and emphasized on the environmental aspects of the project.

The Assistant Manager (Social Management) spoke on the social aspects of the project by citing numerous examples. She also enlightened the various benefits that the villagers could obtain from the project.

After the interactive session, the village signed the EOI, VGA and Green charter followed by the selection of candidates for the Village Natural Resource Management Committee. The Village Executive Committee (VEC) and the entire community carried out the procedure and elected the members of the VNRMC on the same day.

The Formation of the Village Natural Resource Management Committee was done in a public meeting in the presence of the entire village and the CLLMP staffs. The community itself chose the President, the Secretary and the other executive members of the Committee.

The opening of the bank account was initiated after the village signed the EOI (Expression of Interest), the VGA (Village Grant Agreement) and the Green Charter. Umdohbyrthih village opened their VNRMC account on the 17th of August 2019.

The Accountant of CLLMP Ri Bhoi District trained the Purchasing and Procurement Committee of Bhoirymbong Block including members from Mawkydep Village on matters relating to Accounts and Book Keeping on 13th September 2019.

The PRA exercise aims to incorporate the knowledge and opinions of the community in the planning and management of development projects and programmes.

PRA exercise at Mawkyrdep Village took place on 20th March 2019. There were a total of 129 villagers taking part in this exercise who contributed their time and knowledge to this project. During the PRA exercise, the CLLMP officials and the community members were divided into groups to carry out the transect walk, fill the Social and Environmental Templates, the Seasonal Calendar, draw the Boundary map and the Resource Map. The activities concluded with an extensive discussion on the issues and challenges that the community faces and how they can be addressed through the CLLM-Project.

Findings Based on the PRA Exercise at Mawkyrdep Village:

1. Main agricultural produce is Paddy.
2. Villagers also cultivate Ginger but most of the fields are not in the village.
3. Four types of forest ownership: Community, Private, Church owned and Government.
4. Four springs are present in the village with two already developed but needs more work.
5. Four main streams flow through the village.
6. Five water tanks available.
7. Two Check dams already present.
8. Bamboo is present in abundance in the village.
9. Jhum is also practiced but mainly away from the village area by the villagers.
10. Paddy fields are prone to flooding during rainy season.

1. Three check dams needed: Two for irrigation purposes and one for drinking water but is present in Mawpdang village. The village has land deeds and written documents for lease of the spring to be developed as a water source.
2. Further development of two springs which already have prior work on them. But two other springs are not yet developed.
3. Community forest needs Afforestation.
4. Community nursery for endemic, medicinal plants and trees.
5. Desire to conserve orchids in the village.

With the completion of the Participatory Rural Appraisal (PRA) Exercise, a joint training to help the VNRMCs of Bhoirymbong Block develop their Community Natural Resource Management Plan or CNRMP was organized on 13th September 2019 at the Community Hall of Umdohbyrthih Village. The members of the VNRMC from Mawkyrdep Village also attended the training.

Manager of Environment Management along with the Assistant Manager explained on the different types of plans that can be adopted by the villages and stressed on the need for more holistic and sustainable plans which will benefit the community as a whole.

Field Engineer made an inspection to the proposed Intervention sites of Mawkyrdep Village and prepared the Estimates and Work order for the same.