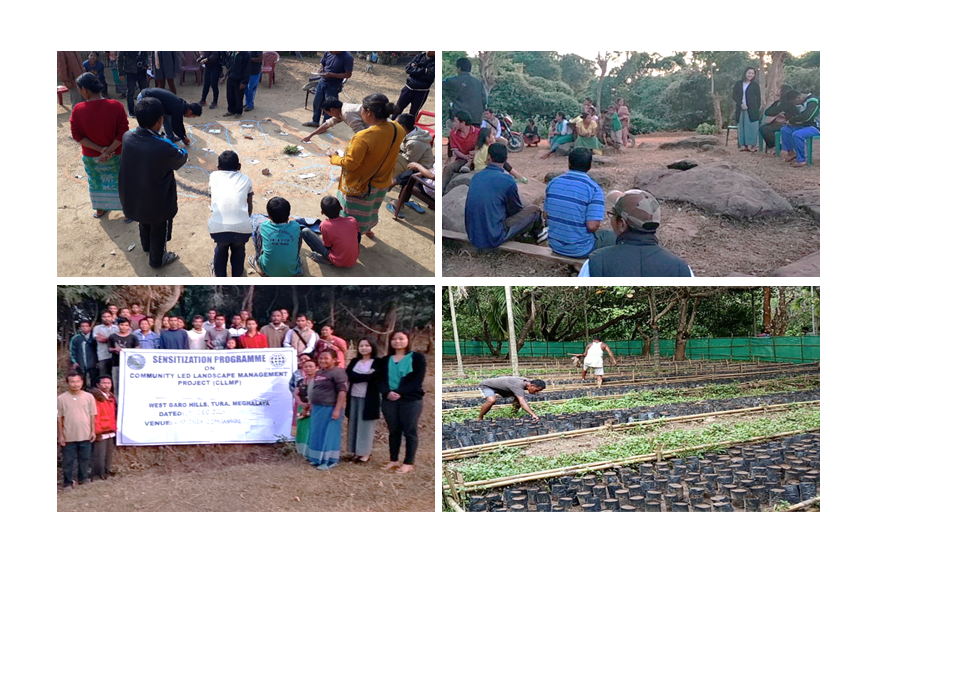 Aminda Simsanggre falls under Gambegre C&RD Block in  West Garo Hills District in the state of  Meghalaya. The village is at a distance of about  3 km from the Block office and 22 km from the district headquarter, Tura. The total geographical  area of the village is around 960.31 hectares and a  total population of 724 with 95 HHs.

A Ground truthing exercise was conducted on the 13th of December, 2018 by the district team comprising of Social, Environment and M&E Assistant Managers.

The sensitization programme was held on the 13th of December, 2018 in Aminda Simsangre village. It saw an attendance of 30 participants including the headman and VEC secretary.

It was followed by an open discussion, in which many queries were raised by the community members and responded by the DPMU team .

Signing of Documents: The village signed the Expression of Interest (EOI), the Village Grant Agreement (VGA) and Green Charter followed by the selection of candidates for the Village Natural Resource Management Committee (VNRMC). The Village Executive Committee (VEC) and the entire community carried out the procedure and elected the members of the VNRMC.

Formation of the  VNRMC: The formation of  the Village Natural Resource Management Committee was done after the sensitization programme and the community members chose the President, the Secretary and the other executive members of the committee.

Following this, the VNRMC also selected the Village Community Facilitators (VCF). Six VCFs were selected, of which three were kept on standby.

The Participatory Rural Appraisal exercise aims to incorporate the knowledge and opinion of the community in the planning and management of developmental projects and programmes. PRA exercise at Aminda Singsangre village was conducted on the 29th of January 2019. A total of 30 community members who took part in this exercise.

The Community Natural Resource Management plan was prepared at a village level meeting on the  29th January 2019. The meeting saw a participation of both men and women including the village headman , VNRMCs members and Village facilitators.

A site verification was done on the 23rd of April, 2019 by a team from the SPMU and DPMU. During the verification of sites, some of the proposed interventions had to be omitted from the plans since they were found to be unfeasible.