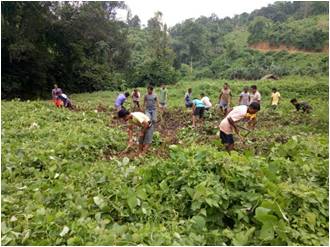 According to the villagers, the fertility of the soil is not good because of which yield per hectare is very less.

The DPMU team of South Garo Hills District took the first step to make social contact with the village leaders and visited the village for ground truthing. After this, an Awareness and Sensitization Programme about the CLLMP project was conducted on the 5th of January 2019. A total of 60 villagers attended the programme including the Nokma, the village secretary, and the VEC secretary.

Chaired by the acting Nokma, a general meeting of the village was called and the VNRMC of the Chokpotgre village was formed on the 8th of January 2019 in the presence of the Nokma and the DPMU staff. The VNRMC members were explained about the role of the VNRMC in implementing the day-to-day activities of the project. On the same day the community also elected the EC members for their VNRMC.

Following this, the VNRMC also selected the Village Community Facilitators (VCF). Six VCFs were selected, of which three were kept on standby.

On the 15th January 2019, the VNRMC EC members of Chokpotgre signed the Citizen’s Green Charter, the Village Grant Agreement (VGA) and Expression of Interest (EOI) in the presence of Shri. Dolrich G. Momin, SDO as well as BDO of Chokpot Civil sub-Division at his office in the Chokpot C&RD Block Office. Officials from the DPMU were also present to facilitate the programme.

PRA is one of the effective and most commonly used methods for data collection, particularly when it comes to planning process in the village. It is a method where planning is done with the community’s participation. The community comes together to identify all the resources available within their village and find out their own problems and look for the solution.

The PRA exercise at Chokpotgre village was conducted on the 13th February 2019.

The objective of the CNRMP is to prepare a roadmap of the future course of action on the management of Natural Resources within the village and adjoining areas through effective and timely implementation of the project. Also the VNRMC intends to draw the technical and financial support  by way of Convergence with different line departments other than the CLLMP Project, which are having similar approach related to NRM and allied activities, so that the planning  is  holistic and is a plan which will balance all round social, economic, and Environmental development in the village. The people of Chokpotgre, including the VNRMC members, gathered together on the 22nd February 2019 to prepare their CNRMP.

For implementing the various activities under the project, the bank account for Chokpotgre VNRMC was opened on the 13th March 2019.