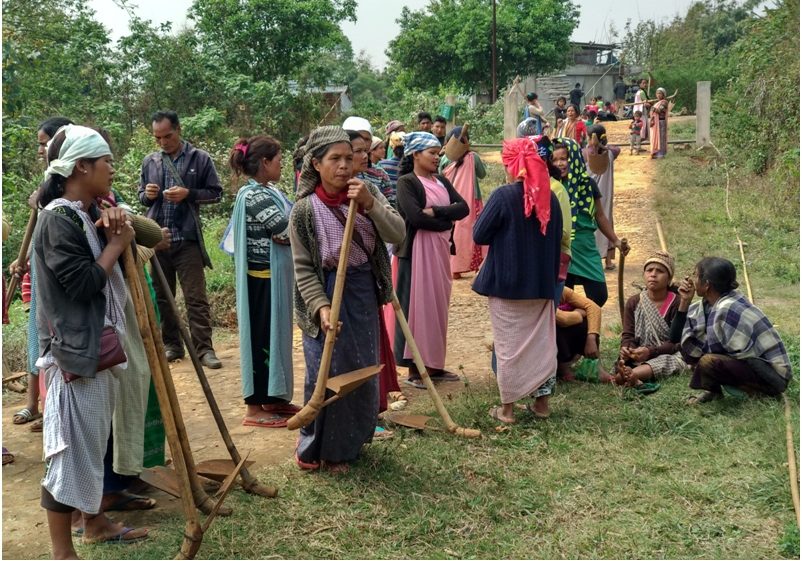 The sensitization programme took place on the 24th January 2019 at the Community Hall of Mynthlu village. Around 15 community members attended the programme.

The Assistant District Project Manager gave a brief introduction about Community Led Landscape Management Project. He spoke on the issues and problems faced by the farmers and villages with regards to water scarcity and water quality in Meghalaya.  He also expressed the concern of how other natural resources such as air, soil, etc. have been affected at a very large scale. Therefore, he requested and encouraged the local community to work towards sustaining the environment for the survival of future generations. He explained the different components of the Project which will help the community in understanding and managing the different landscapes of the village.

Further, the Assistant District Project Manager also highlighted the approach and steps to be followed by the village when they accept the project. The first step was signing of the Citizen’s Green Charter followed by the formation of Village Natural Resource Management Committee (VNRMC) which was constituted by the Village Dorbar. After which the EOI and VGA was signed during the PRA and CNRMP preparation.

After the Sensitization program, they arranged a meeting between the village leaders and the community before electing the executive members of the Village Natural Resource Management Committee (VNRMC).

The village headman and secretary along with two witnesses signed the EOI, VGA and Citizens Green Charter while the PRA/CNRMP program was conducted.

The Deputy Project Director, SPMU and Accountant, CLLMP East Jaintia Hills District trained the Purchasing and Procurement Committee of Saipung Block including members from Mynthlu Village on matters relating to Accounts and Book Keeping on the 7th June 2019.

PRA exercise at Mynthlu Village took place on 20th March 2019 and a total number of 104 participants attended the program.

The Assistant District Project Manager gave the introduction and spoke about the different activities that the participants had to take part during the programme. The Program Associate, Environment Management,spoke in brief about the CNRM plan and the different types of intervention related to natural resource management. A group of participants interacted and helped in collecting data based on the environmental template. With the help of this group, the official was able to identify the different sites of intervention. The Asst. Manager, Social Management, gathered the remaining group of participants for collecting baseline data based on the social template. The program was facilitated by the DPMU team.

5. Submission of CNRMP Plan for the First Phase

Training On Springshed Rejuvenation And Inventorisation

The training was conducted in Jarain (Sutnga) village on 4th December 2019 for the members of the VNRMC and VCF’s which fall under Saipung C&RD Block, EJHD. The Manager, Water Resources, SPMU along with the DPMU team facilitated the training. The training aimed to enhance the participants on management and treatment of springs.

The training on Social Safeguard for the members of VNRMC and VCF’s which fall under Saipung C&RD Block, EJHD was conducted in Latyrke community hall on 29th November 2019. The participants were sensitized on social and environmental safeguard policies related to CLLMP. This is necessary in order to prevent and mitigate undue harm to the village communities once the project is implemented. Manager, Social Management along with the DPMU team facilitated the program.