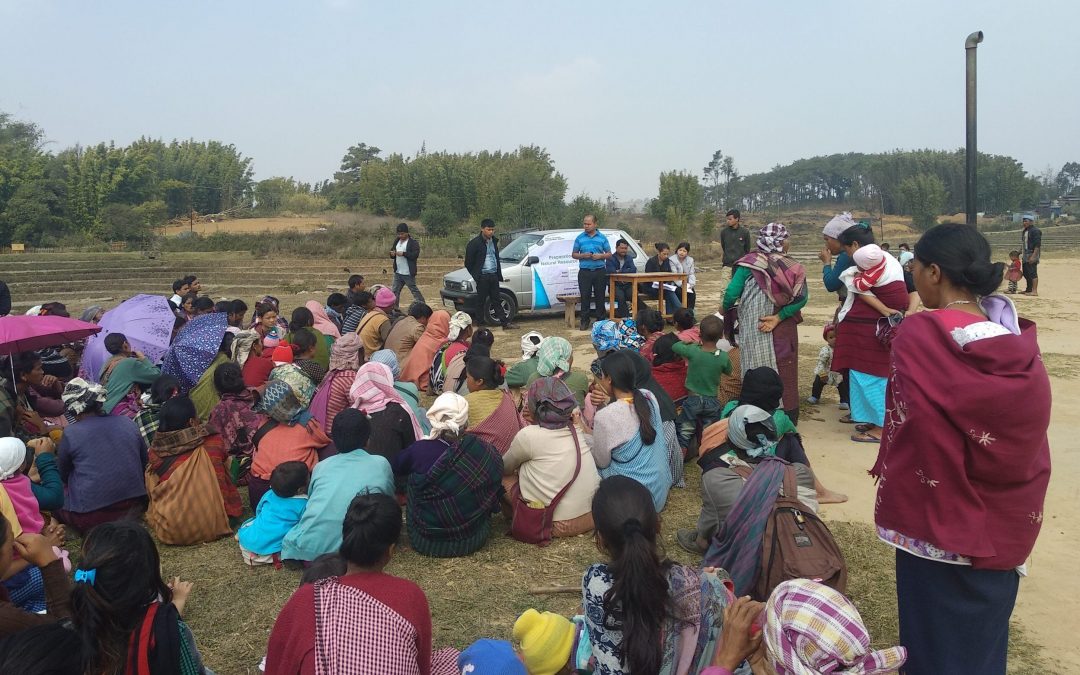 1. There are 256 HHs.
2. The landscape is highly degraded in and around the village due to coal mining activities.
3. Dry barren land can be seen in most parts in the village.
4. Most of the water bodies have been become acidic due to coal mine seepage, but the people still depend on them during the winter season.
5. Forest fire is common.

The sensitization programme took place on the 10th January 2019 at the Community hall, Pamra Paithlu village. The program was chaired by Shri. L. Chyrmang, village headman. Around 46 community members attended the programme.

The Assistant District Project Manager gave a brief introduction about Community Led Landscape Management Project. He spoke on the issues and problems faced by the farmers and villages with regards to water scarcity and water quality in Meghalaya, in spite it being the state which receives the highest amount of rainfall in a year. He also expressed the concern of how other natural resources such as air, soil, etc. have been affected at a very large scale.

The Program Associate, Environment Management, explained on the effects of coal mining and its effect in the fertility of the land/soil. The official also spoke on the drying up of various water sources in the village and expressed the importance of preserving and maintaining them by introducing several methods like planting trees, digging contour trenches, etc. As most of the water bodies in East Jaintia Hills District are affected by coal mining, the official explained on how these water bodies can be treated by setting an example of a successful intervention of the Moolawar stream in MukhaIalong.

The Assistant District Project Manager also highlighted the approach and steps to be followed by the village when they accept the project. The first step was signing of the Citizen’s Green Charter followed by the formation of Village Natural Resource Management Committee (VNRMC) which was constituted by the Village Dorbar. After which the EOI and VGA was signed during the PRA and CNRMP preparation.

After the programme, the village headman and secretary along with two witnesses signed the EOI, VGA and Citizens Green Charter. They arranged a meeting between the village leaders and the community before electing the executive members of the Village Natural Resource Management Committee (VNRMC).

The Accountant of CLLMP East Jaintia Hills District trained the Purchasing and Procurement Committee of Khliehriat C&RD Block including members from Pamra Paithlu Village on matters relating to Accounts and Book Keeping on the 13th July 2019 in DRDA Conference Hall, Khliehriat EJHD.

The Assistant District Project Managergave the introduction and spoke about the different activities required to be taken part during the programme. The Program Associate, Environment Management, spoke in brief about the CNRM plan and the different types of interventions. A group of participants interacted and helped in collecting data based on the environmental template. With the help of this group, the official was also able to identify the different sites of intervention. The Asst. Manager Social Management gathered the remaining group of participants for collecting baseline data based on the social template.

1. Main agricultural produce is Paddy.
2. The 256 HHs highly depend on firewood as a source of fuel.
3. Drinking water is limited over a period of 3 to 4 months during the winter season.
4. Two types of forest ownership: Community & Private.
5. There is one community forest.
6. The springs which are present in the village which need rejuvenation.
7. No disputes/constrains encountered within the village community or with any neighbouring villages.

1. Rejuvenation of springs which fall under community land through activities such as afforestation and contour trenches.
2. Community nursery for endemic species, fruit trees and lemon grass.
3. A dugout pond for collecting rain water.
4. Afforestation, bio-fencing and fire line control in the community forest.
5. Training on Land productivity, Springshed management and Solid waste management is necessary for the village community.
6. Treatment of streams which flow through the village using the open lime channel.

Training on Springshed Rejuvenation and Inventorisation

The training was conducted in Umsatai village on 4th December 2019 for the members of the VNRMC and VCF’s which fall under Khliehriat C&RD Block, EJHD. The Manager, Water Resources, SPMU along with the DPMU team facilitated the training. The training aimed to enhance the participants on management and treatment of springs.